About “Birds in Action”

My primary interest in birds is not counting as many different species as I can; it is trying to capture the beauty, grace and lifestyles of these magnificent creatures. After I began photographing them in the 1990s, I quickly grew tired of the “bird on a branch” look and began focusing on action shots.

Most of these images were captured in one of three places along the Texas Gulf Coast.

Every spring, rare and exotic species make High Island their destination of choice after a two- to three-day, non-stop flight across the Gulf of Mexico with no food or water. They stop here to rest and regain their strength before continuing their northward migration.

Resident wading birds like egrets, herons, cormorants and roseate spoonbills also make High Island their rookery thanks to some excellent habitat created by the Audubon Society at Smith Oaks. In early March, the areas waterfowl move to the rookery and begin their courtship displays, rituals and nest building. By late March, the nests are filling with eggs and chicks are beginning to hatch. In April, the chicks quickly grow. In May, they fledge and leave their nests to start the cycle of life all over again.

Because of the number of birds in such a small area and their proximity to good observation areas, Smith Oaks represents a unique opportunity for photographers.

I currently use a Nikon D4 with their 600mm f4 and 200-400 lenses. I also sometimes use Nikon’s 1.4x and 2x tele-extenders. Because of the weight of this equipment, tripods are a must. A good gimbal head like the Wimberley can make the difference between getting and missing the shot.

I typically shoot in aperture-preferred mode at maximum aperture with the ISO set to the highest level possible without generating noise. This forces the camera to use the fastest shutter speed. On the D4, that’s frequently 1/8000th of a second.

Spot metering helps determine the best exposure for birds. Otherwise, dense foliage or bright skies skew the exposures. When shooting white birds, I override the indicated exposure to prevent highlights from being blown out. Exposure compensation ranges from -.33 to -1.66 depending on the time of day. I typically shoot in the RAW format so that if images are accidentally underexposed, I can adjust the exposure during processing.

The resulting images are so sharp and detailed that you can often see the lattice structure within the feathers of birds in flight. 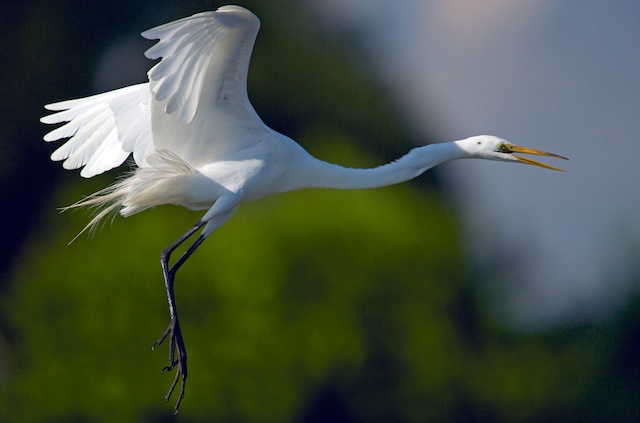 I have even – from a distance of 30 feet – caught insects clinging to birds in flight. Note the dark spec on the head of the egret above. In the enlarged detail below, you can see that it appears to be a mosquito. Note also the tiny dot of light being refracted through the egret’s cornea onto its bill. My thanks to the wonderful scientists at Nikon for making it possible to capture all this amazing detail. 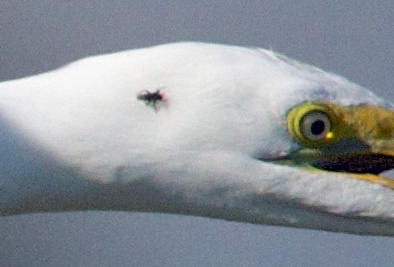